The most developed, longest running, most active and the only FREE RuneScape Classic Private Server.

RSCR is the home of the very first mobile version of RuneScape!!

Accept no imitations! Join the Original

We have active and friendly community that you won't find anywhere else!

One of a Kind Dueling System

We have added 3 new rules and configurable equipment rules!

Relive the glorious combat of RuneScape Classic in wilderness and custom battles!

Show off your PK skills with our one of a kind capes!

500 Kills and you can wear the Black Cape!

500 Skulled Kills and you can pick your color!

RSCR has outdone itself once again!

We are the first RSPS to implement Clue Scrolls! Solve the challenging clue scrolls for a chance at trimmed or god armors! 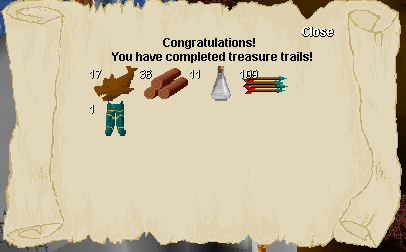 With our new, RSCR exclusive, never before in RSC,  in-game world map, you never get lost! 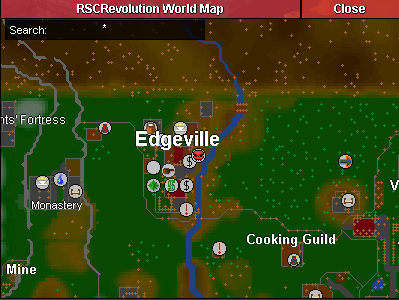 Sell and buy with ease in our in-game market!

Optimize your training session with our seamless GUI - Years of expertise at your fingertips!

These are designed to help new players learn the ropes, while earning rewards! 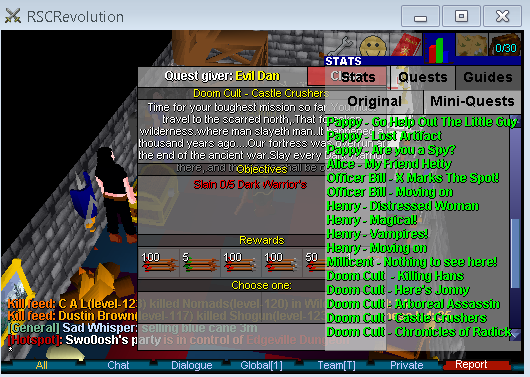 Size up monsters and their drops with ease. Think of it as your RuneScape Pokédex!

Introducing the highly-anticipated Team System to the world of RuneScape Classic. With this system, player clans become intrinsic to the new meta of combat- and skill-based play. Aside from formally introducing your clan tag in-game, teams will cooperate to unlock benefits such as: team bank slots, team color for minimap dots, and team skilling levels which allows your team to skill beyond level 99.
First, create your team using the "Team manager" interface in the wrench menu. You can have up to ten members in your team/clan.

Your team tag will be visible to everyone with draw-names enabled! Also, the chat channel for team is ::t

You will immediately have access to a shared bank for your team, as well as to statistics including your team's win/loss ratio. Deathmatch interface to be released at a later date.

Talk to the Team Vendor in Edgeville to adjust the minimap dot and tag color of your team, for easier formations in the wilderness. The Team Vendor sells all upgrades for your team, which cost gold coins to implement. 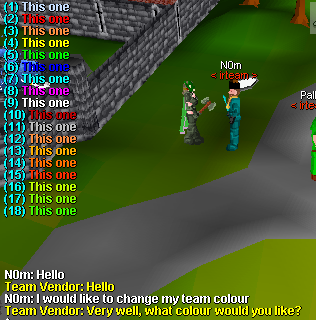 Finally, the team system adds team skill levels, which unlock perks for your team. While your personal skill levels are capped at 99, your team's skill level starts at 1 and can go up to 255, with each member's activity adding toward the team's skill XP. Perks start at level-80 in the following skills, with more perks to be added: 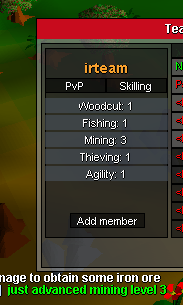 For example, at lvl-80 fishing, team members will have a chance of noted items.

Take care when creating your team and choosing your name, because if you disband your clan your team bank and XP will disappear!

Retrieved from "https://rscrevolution.fandom.com/wiki/RSCR_Features?oldid=1156"
Community content is available under CC-BY-SA unless otherwise noted.