This is a 100% RSCR original Quest Line. Written by none other than our Admin BIlly, who also wrote the humorous Billy Mays' Quest Reviews

Today a no-good wizard named Evil Dan showed up at the Church of Zamorak in Southeast Varrock. 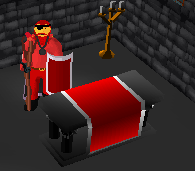 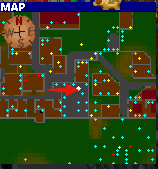 If you talk to him he'll try to encourage the worst instincts in you: assassination, devil worship, global domination, and reconstructing banned artifacts. So as a law-abiding RuneScapian, you should probably stay away from him.

Here are the chapters to his quest to restore the Bloody axe of Zamorak and his cult to power.

Just a couple of notes: If you do not want to gain experience during this quest, always choose the reward option that says "0xp" when the reward is experience. This option is included because ::fatigue doesnt work on rewards. Also, the Bloody axe of Zamorak is a reward for finishing the questline (along with hundreds of thousands of xp in a combat stat of your choice). The axe is a cool unreleased item from RSC quests about evil cults, so it made sense to pop up here, we also gave it a special 'brandish' effect which you'll have to check out on your own. Finally, this is a string of miniquests so, you won't get quest points.

Hopefully you get as much of a kick out of completing the questline as I did making it.

Retrieved from "https://rscrevolution.fandom.com/wiki/Doom_Cult_Questline?oldid=293"
Community content is available under CC-BY-SA unless otherwise noted.